Marijuana posession for personal use is decriminalized in Virginia effective July 1, 2020 - it is not legal to possess, however. Click here to learn more.

Virginia schedules controlled substances.  Virginia does not look to federal law to determine how controlled substances should be scheduled.  Click here to view the statutes that show what schedule a controlled substance is assigned.  Simple possession of a Schedule I or II Drug (Controlled Substance) in Virginia is a Class 5 Felony punishable by up to 10 years in prison.  This applies to even the smallest amount of cocaine residue.  Simple Possession of Schedule III, IV, V, or VI drugs are all treated as misdemeanors.  No Schedule I drug is lawful to possess.  Some Schedule II thru VI drugs are lawful to possess but only if you have a valid prescription.  Virginia Code Section 18.2-250 is the statute that criminalizes unlawful drug possession.  If you are charged with a drug related offense, contact George Freeman today - a seasoned Fairfax Criminal Defense Attorney (Lawyer).

The answer is not so simple.  The law makes it illegal (and a crime) to unlawfully possess certain controlled substances (or drugs).  This means "ownership" of the drug is not what is at issue.  The Commonwealth does not have to prove who owns the drug, or who bought the drug, or who was actually going to use the drug.

Actual possession involves situations where drugs are found on the person, e.g. - your pants pocket, in your backpack you are carrying with you, on your lap sitting in a car.  In these cases, the law says it can be inferred that if you are in actual possession of a drug, you also know its nature and character.  This inference can be rebutted.  Here's an example: Suppose you wear a friend's jacket and in one of the pockets is a small bag of cocaine.  Assume that you are totally unaware it is there in the pocket.  Although you may be possessing the drug, it is not knowing and intentional because you are unaware of its presence.  Even if you know it is there, say because you felt it, you may still not know what it is, i.e. - its nature and character.  In either scenario you would be innocent if the police found the drug.

Constructive possession is as common as actual possession. Constructive possession cases can be particularly difficult to prove, unless a person has confessed to the police or there is other independent evidence.  Here's why - constructive possession means the drugs are not in your actual possession, but rather they are in your dominion and control.  This means you have control over and access to them.  For example, if you left a marijuana blunt in the glove box of your car and went to the movies, the entire time you were in the theater you would be constructively possessing the blunt.  It would be within your dominion and control because you would have control and access to your vehicle.

In constructive possession cases, the Commonwealth must still prove that the possession was knowing and intentional and that you knew the nature and character of the substance.  This means, unless you confessed to the police or they had other evidence, drugs found in your car without more would be a tough case (maybe even impossible) to prove against you.  What evidence would there be that you knew of the nature and character of the drug found?  Or that you knew it was even there?  Mere presence of drugs in an area under your dominion and control is insufficient to prove you unlawfully possessed the drug.

This legal principle applies in every constructive possession case - ownership or occupancy of the premises or vehicle upon or in which marijuana or a drug was found does not create a presumption that such person either knowingly or intentionally possessed such marijuana or drug.  This principle is embedded in the caselaw in Virginia on possession and is codified by statute.

(Note - Nature and character means that you know the substance is a drug and not lawful to possess.  If you believe you are in possession of heroin, but it is actually cocaine, this provides no defense on the issue of nature and character.)

Because the law on possession is more nuanced and complicated than one might think, a person charged with such an offense should select a seasoned Fairfax Criminal Defense Lawyer...George Freeman is such an attorney.

Just like traffic offenses and DUI cases, every single possession case involves the Fourth Amendment to the United States Constitution.  The preceding was a brief overview on the issue of possession.  But before that analysis really comes into play, how did the police come into contact with you?  Was it a consensual encounter, the product of a traffic stop or investigatory detention (based on reasonable articulable suspicion)?  Were you arrested on a warrant, or on the officer's belief there was probable cause?  If so, was the arrest lawful?  Were the drugs found through a consent search, or a search incident to arrest?  Was the search lawful or the product of an illegal detention, unlawful arrest, or consent that was actually coerced?  These are all critical issues that a skilled attorney must analyze.  A Fourth Amendment violation which leads to evidence being discovered is referred to as the "fruit of the poisonous tree."  The result that is typical: suppression of that evidence.  Suppressed evidence from the Commonwealth's case could mean they have no case at all and your charge would be dismissed.

You can see there are many defenses to a charge of simple possession.  There is also an affirmative defense to the charge.  That is to say, assuming the Commonwealth can prove you possessed a drug (either actual or constructive) and assuming they can prove you knew its nature and character, you can still avoid conviction if you called the police or fire and rescue to aid another (or yourself) who was in a life threatening situation due to overdose.  This defense is fact specific and complicated and would require a thorough review of the case and police account of what occurred.

Constitutional violations must be asserted or they may be waived.  George Freeman, a Fairfax Criminal Defense Lawyer, can analyze your case and determine whether you have any merit worthy constitutional issues to assert in the defense of your case.  Contact his office today to schedule a free consultation.

If you are charged with a simple possession of a controlled substance (drug or narcotic illegal to possess) and your record is clean of any prior drug related offense you are eligible for a "251 disposition."  This is a program ordered by the court that requires you to successfully complete an ASAP program, complete at least 24 hours of community service.  At the end of the program your charge would be dismissed, but you would have to pay court costs and the cost of the ASAP program.  This program is also available for simple possession charged as a felony - cocaine, heroin, PCP, ecstasy, fentanyl, etc.  Failure to complete the program will result in a conviction, and for Schedule I or II drugs, this means a felony conviction.  (Click here to read the deferred disposition statute.)

Distribution and PWID (Possessing with the Intent to Distribute)

Distribution and PWID are punished the same.  If you are charged with Distribution or PWID of a Schedule I or II drug, the penalty range is 5 to 40 years and a fine of up to $500,000.00.  (This range is not a "mandatory minimum" which means that you must be given at least a 5 year sentence BUT the court has the power to suspend some or even all of that sentence and place you on probation.)  If the quantity of the drug is substantial, or if you have a prior drug dealing conviction on your record, the penalty could be even greater.  The enhanced penalty could require mandatory prison time.  (Click here to read Virginia's drug dealing statute.)  For charges of Distribution or PWID regarding marijuana, the penalties are less severe.  (Click here to read Virginia's marijuana distribution statute.)  You can see that distribution penalties are no joke - George Freeman, a seasoned Fairfax Criminal Defense Attorney, is ready to take your call and schedule a free consultation.

Distribution charges are pretty straightforward, factually.  Most cases involve a hand-to-hand exchange of drugs or marijuana.  That is to say, the dealer delivers to another person the drugs.  It does not matter under the law whether the drugs were sold, given as a gift, or were exchanged for some other consideration.  There is, however, a mitigation defense known as accommodation.  If you can prove by a preponderance of the evidence that you were only accommodating another in distributing the drugs (meaning passing the drugs and receiving no consideration for your effort), your range of punishment can be drastically reduced.

So, how do the police know when a drug deal has occurred?  And how do they confiscate the drugs?  Most of the time, the dealer has sold to an undercover police officer or to a confidential informant.  Typically several hand-to-hand deals have occurred before the police finally make an arrest and charge the dealer.  There are defenses to these cases, but typically the facts are pretty clear cut.  What can you do if you are charged?  It is possible to work with the police and assist them; if you do that your charges could be reduced or potentially dropped.  Besides technical defenses, like challenging chain of custody of the drugs from the time they are seized until submitted to the lab for testing, there are constitutional defenses (as discussed above).

PWID cases, like constructive possession cases, can be more difficult for the Commonwealth to prove.  Unless a person has confessed, there must be some other evidence besides the drug itself to show it was possessed but intended ultimately for distribution.  Factors to support a PWID charge that police look for include: weight or quantity of the drug, large quantity of baggies, scales, large amounts of cash, owe sheets or documents showing drugs deals, and what is on your phone.  Police will typically seize your phone and seek a search warrant to determine whether you have text messages and the like indicative of drug dealing.

The defenses to PWID and Distribution are the same as the defenses for possession.  Actual possession versus constructive possession, nature & character, and the Fourth Amendment are at issue.  Additionally, even if you confessed to the police, that confession may not be admissible.  That issue turns on whether you were in custody or under arrest and, if you were, whether you were advised of your rights under Miranda (pursuant to the 5th Amendment).  These are all issues to discuss with a skilled attorney.

If you have been charged with a drug offense in Fairfax County or elsewhere in Northern Virginia, or fear charges may be coming, contact us today for a free consultation. George Freeman is an experienced Fairfax Criminal Defense, Drug Possession or Distribution, Attorney in Fairfax County. 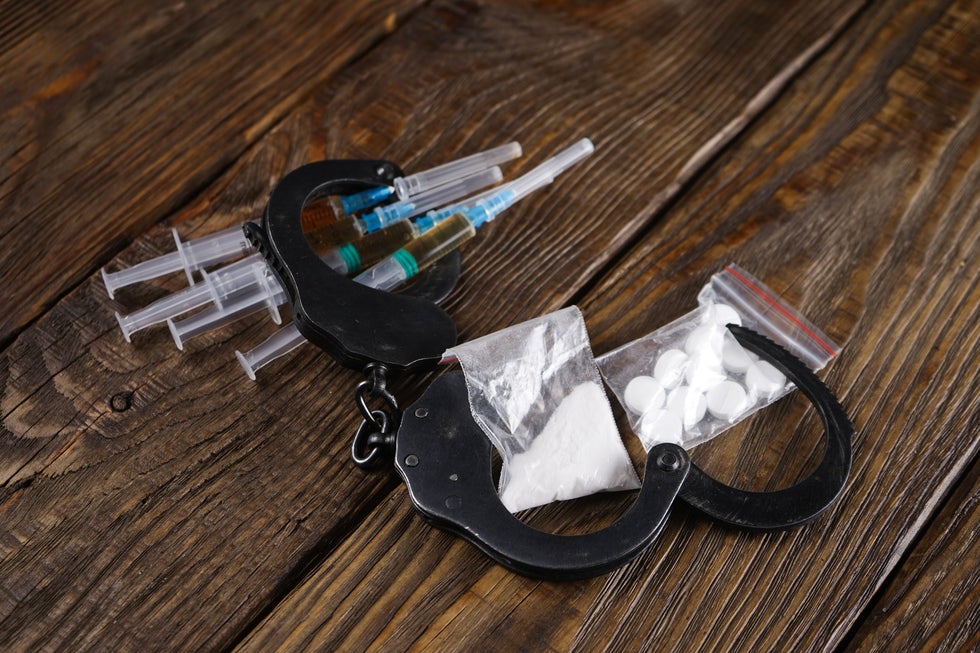