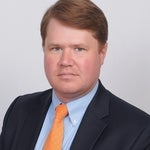 He spent 9 years in the Fairfax County Commonwealth's Attorney's Office as a Prosecutor.  When George left the office to open his own practice he was a Senior Assistant Commonwealth's Attorney.  Over the years he handled thousands of cases and tried over 50 jury trials and hundreds of bench trials (judge without a jury).  George dealt with cases involving family members, juveniles, adults, even companies charged with a crime.  He specialized in Sexual Assault prosecutions with both adult and child victims, but also prosecuted Drug Offenses, Violent Crimes including Murder & Manslaughter, Arson, DUI, and Property and Financial Crimes.

George's path has been much the same as his grandfather.  When his grandfather graduated law school he worked in the same office, the Fairfax Commonwealth's Attorney's Office.  After four years as a prosecutor he left the office for private practice.  He spent the next 50 years representing individuals all over the Commonwealth of Virginia.  Now George is fortunate to follow in his footsteps.

In the trial arena, he is uniquely qualified because of the extensive experience he gained as a prosecutor appearing in every court and before every judge within Fairfax County.  As a prosecutor George's duty was to follow the law and seek justice; that is what he did for nearly a decade.  A lawyer in private practice has an equally important duty - to zealously represent the interests of his client.  To do this, a lawyer must be ready to take a matter into the courtroom and engage in the battle of trial.

Our constitutional system of governance, and our cherished values of liberty and self-determination, mandates that when the state seeks to deprive and take away the life, liberty or property of an individual his cause is competently presented and zealously defended.  When private citizens end up in a civil dispute, a lawyer must be ready to represent his client's interests in the same purposeful, deliberate and skillful manner.

Contact George L. Freeman, IV, today if you have a matter of legal concern.  He will gladly meet with you to discuss your case.